Cannabis consists of the dried flowers of the Cannabis sativa plant, also known as hemp. Cannabis contains a number of active substances, like cannabinoids, fatty acids, and terpenes.  The chemical composition of cannabis determines the effects and side effects. Pharmaceutical grade cannabis dispensed by pharmacies complies with the strictest quality standards and is intended for medicinal use only. Therefore, it is called medicinal cannabis and medicinal cannabis oil.

As part of the human endocannabinoid system (ECS), cannabinoid receptors, CB1 and CB2 receptors are The CB1 receptor is expressed in the brain and peripheral tissues. In both locales, it has multiple functions. found predominantly at nerve terminals where they have a role in retrograde regulation of synaptic function. CB1 receptors are enriched in the cerebellum (cognition, coordination), hippocampus (learning and memory), cortex (cognitive function, executive function and control, integration of sensory input), basal ganglia (motor control, planning) ventral striatum (prediction and feeling of reward), amygdala (anxiety, emotion, fear), hypothalamus (appetite, hormone levels, sexual behaviour), brain stem and spinal cord (vomiting, pain). CB2 receptors are predominant in the periphery, on immune cells, hematopoietic systems and other locales. There is evidence of CB2 receptor expression in the brain. CB2 receptors also modulate the release of chemical signals primarily engaged in immune system functions

Chemotherapy-induced nausea and vomiting CINV, is one of the most distressing and common adverse events associated with cancer treatment. In the absence of effective anti-emetics, chemotherapy- associated nausea can be so severe that as many patients opt to discontinue chemotherapeutic treatment. Once a patient experiences nausea, it tends to persist throughout treatment and make subsequent episodes of nausea more severe. Post-treatment nausea is also associated with impaired patient functioning, increased anxiety, depression, and reduced quality of life which can all negatively impact treatment adherence or even cause discontinuation of treatment entirely.

A number of nuclei in the medulla are involved in the regulation of appetite and nausea. These nuclei coordinate sensory input from the brainstem, vagal complex, vestibular organs, and peripheral organs. Endocannabinoids and CB1 agonists inhibit vagal fibres to promote eating and CB1 antagonists to decrease or inhibit food intake. The cannabinoids (THC, CBD, THCV, CBDV) and cannabinoid acids (THCA and CBDA) suppress acute nausea and vomiting as well as anticipatory nausea.

Wasting syndrome, cachexia from tissue injury by infection or tumour, loss of appetite (anorexia) in AIDS and cancer patients, and anorexia nervosa, cannabinoid system plays a crucial role in modulating appetite, food palatability and intake, also in energy metabolism and the modulation of both lipid and glucose metabolism. A number of nuclei in the medulla are involved in the regulation of appetite and nausea. These nuclei coordinate sensory input from the brainstem, vagal complex, vestibular organs, and peripheral organs. Endocannabinoids and CB1 agonists inhibit vagal fibres to promote eating and CB1 antagonists to decrease or inhibit food intake. 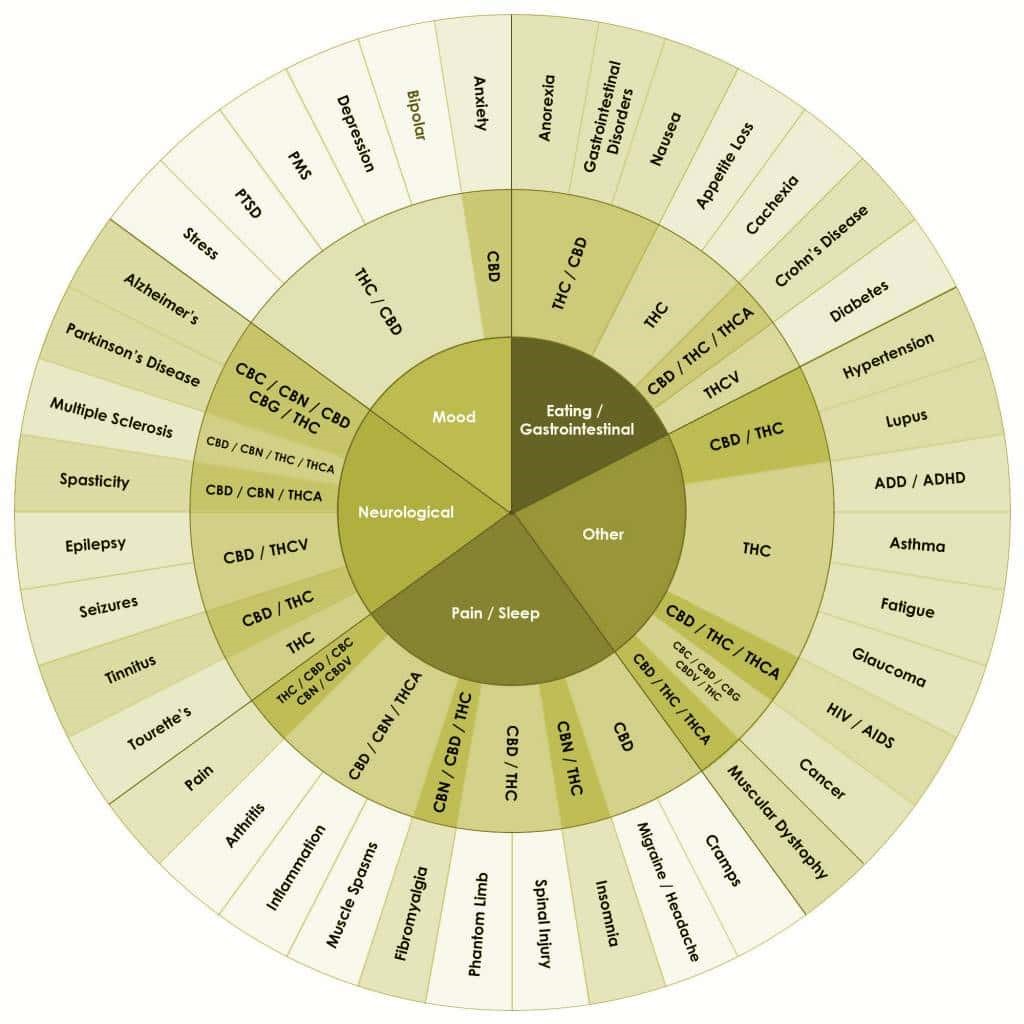 Medical cannabis is indicated as treatment for symptom improvement in adult patients with moderate to severe spasticity due to multiple sclerosis (MS) who have not responded adequately to other anti-spasticity medication.

Arthritis and musculoskeletal disorders, the arthritides include a broad spectrum of different disorders (e.g. osteoarthritis (OA), rheumatoid arthritis (RA), ankylosing spondylitis, gout, and many others) all of which have in common the fact that they target or involve the joints. Scientific studies have demonstrated that joints, bone, and muscle all contain a working ECS, that some arthritides such as OA and RA are associated with changes in the functioning of the ECS, and that modulation of the ECS may help alleviate some of the symptoms associated with certain arthritides.

Movement disorders. The individual components of the ECS are particularly abundant in areas of the brain that control movement, such as the basal ganglia. Motor effects generally arise as a consequence of changes in ECS activity, with activation of the CB1 receptor typically resulting in inhibition of movement. A number of studies have reported changes in CB1 receptor levels and CB1 receptor activity in motor diseases such as Parkinson’s disease (PD) and Huntington’s disease (HD), and the findings from such studies suggest a complex link between the ECS and the pathophysiology of these and other neurological diseases.

Dystonia involves over-activity of muscles required for normal movement, with extra force or activation of nearby but unnecessary muscles, and is often painful in addition to interfering with function. Dystonia can be primary, including torticollis and blepharospasm orofacial dyskinesias or dystonias (Meige syndrome) or part of another condition such as HD, and tardive dyskinesia after dopa-blocking drugs

Palliative care, may be useful in alleviating a wide variety of single or co-occurring symptoms often encountered in the palliative care setting.  These symptoms may include, but are not limited to, intractable nausea and vomiting associated with chemotherapy or radiotherapy, anorexia/cachexia, severe intractable pain, opioid use disorder, severe depressed mood, anxiety, and insomnia.

The “opioid-sparing” effect refers to the ability of a non-opioid medication to confer adjunctive opioid analgesia with the use of a lower dose of the opioid, thereby decreasing opioid-associated side effects.

Medical cannabis is used in combination with other antiepileptic medicines to treat seizures that occur with two rare conditions, Dravet syndrome and Lennox-Gastaut syndrome, reduction in seizure frequency as well as an increase in quality of life among adolescents with rare and serious forms of drug-resistant epilepsy. It can be used in adults, adolescents and children of at least 2 years of age. CBD surge expression levels of the voltage-dependent calcium channel α-1h subunit, in CB2 receptor gene expression, and a decrease in the expression of the serotonin transporter gene in lymphocytes isolated from Dravet Syndrome patients. The endocannabinoid system plays a complex role in regulating motor pathways, which conceivably are relevant to symptomatic relief, or to addressing the underlying pathology in a wide range of neurological diseases characterized by motor impairment. CB1 receptors are abundant in brain regions that regulate motor function and coordination, including the basal ganglia, cerebellum. CB1 receptors are down regulated in several neurological conditions.

Obstructive Sleep Apnea and insomnia, Obstructive sleep apnea (OSA) is a sleep disorder characterized by repetitive episodes of complete (apnea) or partial (hypopnea) collapse of the upper airway (mainly the oropharyngeal tract) during sleep, with a consequent cessation/reduction of airflow. The obstructive events cause a progressive asphyxia that increasingly stimulates breathing efforts against the collapsed airway, typically until the person is awakened. These episodes cause acute physiological disruptions including fragmented sleep, intermittent hypoxia, and exaggerated fluctuations in heart rhythm, blood pressure, and intrathoracic pressure. Over time, the acute disruptions lead to chronic conditions such as hypertension and heart disease, reduced cognitive function, depression, and impaired performance at work.

PTSD refers to the development of a cluster of characteristic symptoms that follow exposure to an extreme traumatic stressor and which appears to involve aberrant memory processing and impaired adaptation to changed environmental conditions. Characteristic symptoms include persistent, intrusive recollections, or a re-experiencing of the original traumatic event (through dreams, nightmares, and dissociative flashbacks), numbing and avoidance, increased arousal, and sleep disturbance. Patients with PTSD are also at risk for other psychological disorders, including but not limited to generalized anxiety disorder, major depressive disorder, and substance use disorder as well as physical problems including chronic pain, hypertension, and asthma. The ECS has been associated with the regulation of emotional states and cognitive processes, and neuroanatomical studies have detected the presence of ECS elements in a number of brain structures involved in learning and memory, and in structures which also play central roles in fear conditioning and response implicated in PTSD. The ECS links stress exposure to changes in synaptic plasticity contributing to activation and feedback regulation of the HPA axis, and facilitates the activation of resilience factors during and/or after stress exposure.

Inflammatory skin diseases (dermatitis, psoriasis, pruritus), the skin possesses an ECS. CB1 and CB2 receptors are expressed in a number of skin cell types including epidermal keratinocytes, cutaneous nerves and nerve fibres, sebaceous cells, myoepithelial cells of eccrine sweat glands, sweat gland ducts, mast cells, and macrophages. The ECS and certain associated signalling pathways (e.g. PPARγ, TRPV1) appear to regulate the balance between keratinocyte proliferation, differentiation, and apoptosis; together, these systems may play a role in cutaneous homeostasis but also in diseases such as psoriasis, which is characterized by keratinocyte proliferation and inflammation.

Gastrointestinal system disorders (irritable bowel syndrome, inflammatory bowel disease, hepatitis, pancreatitis, metabolic syndrome/obesity), IBDs include Crohn’s disease and ulcerative colitis. Crohn’s disease is characterized by patchy trans-mural inflammation, which may affect any part of the GI tract. Symptoms include abdominal pain, diarrhoea and weight loss as well as systemic symptoms of malaise, anorexia, and/or fever. Crohn’s disease may cause intestinal obstruction due to strictures, fistulae, or abscesses. Ulcerative colitis is characterized by diffuse mucosal inflammation limited to the colon. Symptoms commonly include bloody diarrhoea, colicky abdominal pain, urgency, or tenesmus. Both diseases are associated with an equivalent increased risk of colonic carcinoma. Cannabinoids appear to have many functions in the digestive system including the inhibition of gastric acid production, GI motility, secretion and ion transport, and the attenuation of visceral sensation and inflammation. CB1 and CB2 receptors are highly expressed on enteric nerves and on enteroendocrine cells (CB2) throughout the intestinal mucosa, on immune cells (CB1 and CB2), and enterocytes (CB1 and CB2). Many gut functions are regulated by endocannabinoids critical for central nervous system (CNS) control of its metabolic and homeostatic functions.

We do not sell edibles, vapes, or any product for smoking